During my stay with the circus on Nantucket my focus was on the adults. While talking to the parents about their children my curiosity shifted to the little ones. What does the circus mean to them? What do they learn from children of other cultures, races while working and playing together?

In St. Louis, during the summer, Circus Flora works together with The Saint Louis Arches, a community outreach program for the underserved children in St. Louis. The kids are introduced to the basic circus skills, such as tumbling, acrobatics and juggling at no charge to the participants.

The plan was to go to St. Louis with my daughter Maya and film her interacting with the children of the circus performers. Over the last years she has been using a point and shoot digital camera. Taking photos of the children practicing and playing together could facilitate their interaction. On line I got in touch with Jessica Hentoff, the founder of the Saint Louis Arches. Getting her cooperation was kind of easy because of my previous stay with the circus on the island of Nantucket. During the three days in St. Louis the focus had to be on filming my daughter exploring the circus back lot and me interviewing the children and some of the parents. This time I had to operate as a one person crew, doing the filming and the sound. Lots of time went in double checking the equipment and having spares for each item.

Three days of filming In St.Louis. After checking into the hotel we got our gear together and went to the circus. We found Jessica Hentoff, who was practicing with the children of The Saint Louis Arches on the back lot. After introducing ourselves, my daughter Maya started taking stills of the practice while I filmed this later on she started showing the stills to the other children and talking about the shots, and by doing so broke the ice. We felt welcome from the moment we set foot on the circus back lot. On the island of Nantucket I noticed that the director David Balding needed the support of a cane to walk. Here in St. Louis he had to use a golf cart to move around showing his commitment to the circus.

The main reason for coming to St Louis was to interview the children of Circus Flora. While working on a documentary, I like to be open for the unexpected moments and adjust my focus. But time is a main concern when you have only three days of filming. It is a luxury to work on a film without a real deadline. The process becomes very organic because you can change the direction of the movie along the way. Maya has opened my eyes over the years to the magic of life. Taking the time to look at a bunch of ants doing their work can be very invigorating. 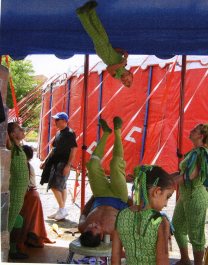 Over the last three years working on this film, my focus has gone from pure documentary to a mixture of narrative, experimental and reportage. We had the good fortune that the weather was great, so everyone was outside. A little tent became the place to socialize and practice, which was a great opportunity for me to observe and film the interaction between the children from different cultures and races. Later during the interviews I asked the kids what they are learning while being with Circus Flora. Trust in the other, tolerance, and the feeling of family were some of their answers. Home schooling was seen by them as a very attractive alternative for going to a regular school.